Dr. Burmeister grew up on a dairy farm in rural Lakefield, Minnesota. He attended the college of Veterinary Medicine at ﻿Texas A&M University﻿ and graduated in 1995. He began his career in small animal medicine in Bloomington, Illinois, and has been practicing in Ellsworth since 1999. Dr. Burmeister is married, and has four children, Aaron, Mimi, Rory and Noe. His pets include two rescued Rat Terriers, Oatmeal and Farina, an abandoned kitten named Mustache and many goldfish . He enjoys gardening, travel and spending time with his family. Dr. Burmeister is a member of the MaineVMA and the AVMA. 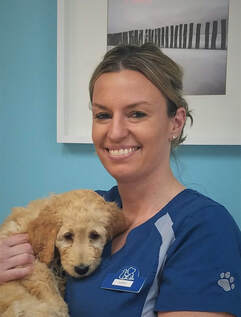 Nikki Gabriel works part-time as a vet tech and the receptionist (when Tracy is out). She lives on MDI with her husband, who is in the Coast Guard. 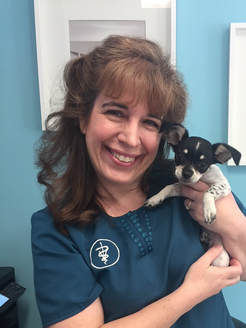 Pilar Burmeister is the clinic manager. She is married to Dr. Burmeister. Pilar is a college professor and is currently the Director of the Nursing Program at Eastern Maine Community College. She grew up in Newton, Massachusetts and attended the University of Texas Medical Branch for her undergraduate degree in Nursing. In 1999 she graduated from Mennonite School of Nursing with her Master's degree in Nursing as an FNP, and in 2015 graduated from Husson University with a Master's Degree in Nursing Education. In her spare time, she enjoys cake decorating, scrapbooking, travel and spending time with her family.

One of our clinic cats 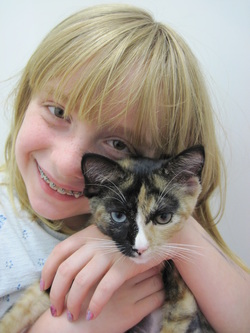 This is Sugar Plum, she came to us from the SPCA. She has one blue eye and one brown/yellow eye. She purrs constantly!

The second of our clinic cats 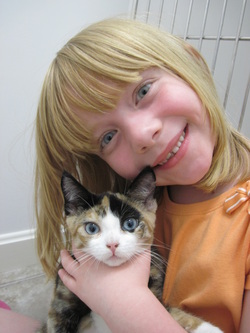 This is Puddin' Pop. She is Sugar Plum's sister. She also came from the SPCA. She loves to play with kitty toys!
Oceanside Animal Hospital Trenton, Maine